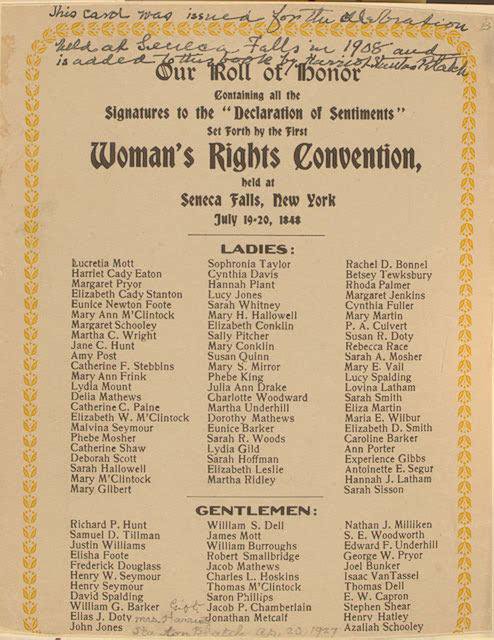 “We hold these truths to be self-evident: that all men AND WOMEN are created equal” (emphasis mine!) reads the Declaration of Sentiments, produced at the Seneca Falls Convention, New York, on this day in 1848.

About 300 people – including 40 men who agreed to remain silent – came to the convention, organised by local Quaker women to call for women’s equality, including the right to vote and rights to property.

All the eleven declarations of the Convention were  passed unanimously except for the resolution which demanded that women be given the right to vote. Those against this declaration feared it was too radical, and they would lose support for the whole Declaration by its inclusion.

In response, organiser Elizabeth Stanton was joined by the abolitionist Frederick Douglass, the only black person in attendance, who spoke powerfully in favour of women’s suffrage, and the resolution ultimately passed. 100 people — mostly women — signed the document. (Was your great great great great great grandparent one of them?)

Newspaper reports were mixed: The Oneida Whig wrote: ”This bolt is the most shocking and unnatural incident ever recorded in the history of womanity. If our ladies will insist on voting and legislating where, gentlemen will be our dinners and our elbows? Where our domestic firesides, the holes in our stockings?”

It would be a long path to equality — a further seventy-two years after the Seneca Falls Convention before American women achieved suffrage in 1920, and even then, it took four more years to be extended to Native American women and men, and it was not until 1966 that obstacles to African American voters were removed.