Death of Vlad the Impaler

On this day in 1477, a letter sent by Stephen III of Moldavia confirmed the death of Vlad the Impaler and his retinue. They had been ambushed by the Ottoman Empire who reportedly decapitated Vlad, and sent his head to Sultan Mehmet II in Constantinople as a trophy.

Vlad the Impaler was also known as Vlad Tepes and also, Vlad Dracula. He was the son of Vlad Dracul, ruler of Wallachia, a region of Romania, and the possible inspiration for Bram’s Stoker’s Count Dracula. Dracul received his name after his induction to the Order of the Dragon – a Christian military order tasked with defending the Church and fighting its enemies, particularly the Ottoman Empire.

Vlad Dracula was born between 1428 and 1431. Wallachia was in a precarious location, right between Christian Europe and the Ottoman Empire. In 1442, Vlad and his brother Radu were taken hostage by the Ottomans to secure their father’s loyalty. Radu adjusted to this, becoming friends with the sultan’s son, Mehmet II, and converting to Islam. But Vlad did not. After the death of his father and older brother, Vlad sided with the Hungarians against the Ottomans, and his first reign as ruler of Wallachia began in 1448, although he was forced into exile later that same year.

The name of ‘the Impaler’ is one well deserved. Vlad’s cruelty was renowned, even during his own lifetime. Impalement was his preferred method of execution – a gruesome death for those condemned to suffer it. It also acted as a form of psychological warfare against his enemies. While he ruthlessly punished lawbreakers and nobles who worked against him, he also helped to rebuild and stablise his country, which had seen many years of upheaval and warfare. His reputation and ruthlessness helped him hold onto power during his second reign.

There are many stories about Vlad that might well be exaggerated. One story tells of Vlad dining in a field of soldiers he has just defeated, and dipping his bread in their blood before eating it. Another describes two Turkish emissaries who visited Vlad, but who refused to remove their turbans. In response, Vlad nailed their turbans to their heads, so they could never remove them again.

In a letter from 1462, while at war with the Ottoman Empire, Vlad writes this:

‘I have killed peasants men and women, old and young, who lived at Oblucitza and Novoselo, where the Danube flows into the sea, up to Rahova... We killed 23,884 Turks without counting those whom we burned in homes or the Turks whose heads were cut by our soldiers…’

During this same war Mehmet II invaded Wallachia with his army. But upon reaching the city of Târgoviște, found some 20,000 impaled Turks to greet them. Up to this point, Vlad had deployed guerilla tactics against Mehmet’s much larger army, and the Turks eventually retreated.

Vlad and his brother Radu, are characters in my Order of Darkness series. In this scene from Stormbringers, Radu talks about Vlad:

‘My brother went home. He inherited my father’s throne and agreed to hold our homelands for the Ottoman Empire, but he was faithless and turned against us. He’s overthrown now – in exile, but he’ll be gathering an army I don’t doubt, and hoping to hold the frontier against us again. He is dead to me. I doubt I’ll ever see him again. He chose the wrong side. He is my enemy. Our fates have led us in opposite directions: he is a great Christian commander, and I am one of the greatest commanders that my friend the Sultan Mehmet can put in the field.’

The newest book in my Order of Darkness series is called Dark Tracks, and will be out at the end of January. You can pre-order using these links: 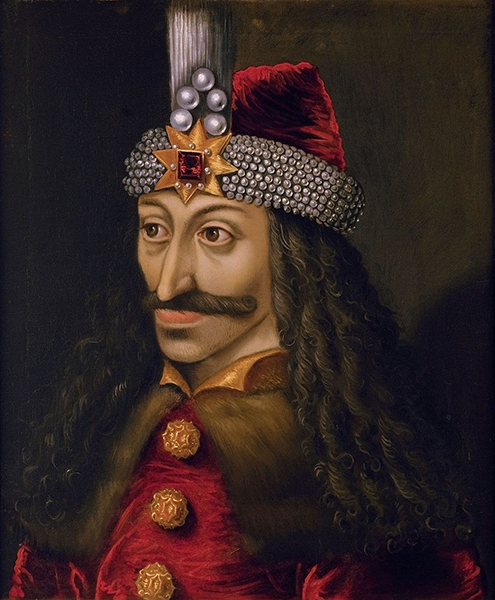