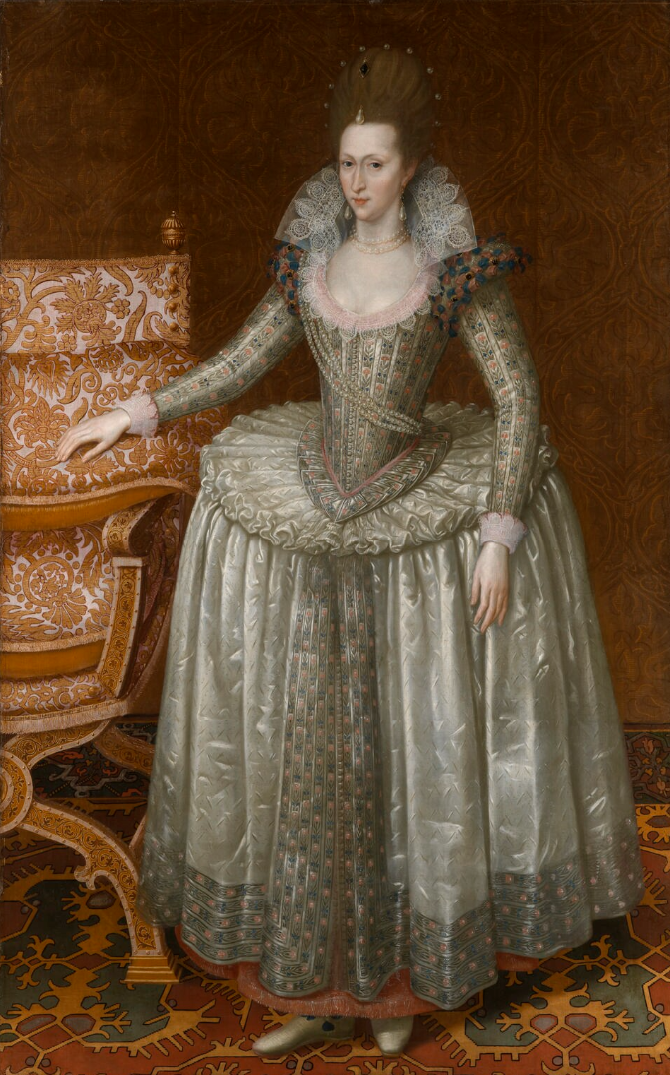 Today in 1590 Anne of Denmark, the delighted fifteen year old bride of king James VI, was crowned queen of Scotland. Still in their first year of marriage, the couple were by all accounts infatuated with each other – after Anne was prevented from sailing to England by bad weather, James had even travelled to Oslo himself as if he couldn’t wait any longer to marry her. The early romance did not last long and soon the couple found themselves frequently in disagreement. James later described marriage as “the greatest earthly felicitie or miserie, that can come to a man”.

Despite the urgent need for an heir, their first child Prince Henry was not born until 1594. What should have been a triumphant time for the new mother soon turned to horror when Anne discovered that James intended to follow tradition and place the baby Prince in the care of the Earl of Mar, 40 miles away from his mother. Desperate not to be separated from her first child, Anne furiously attempted to regain custody but James gave instructions that the baby was never to be surrendered to Anne, even upon James’ own death.

Grieving the separation from her son and then the loss of another baby, the marriage between Anne and James was irrevocably damaged and they began to live more separate lives. James did allow Anne’s younger sons to live with her, but she never stopped fighting to regain custody of Prince Henry. Finally, when James went south to claim the throne of England, Anne seized her chance. Pregnant with another son, Anne travelled to Stirling Castle to take her eldest son. The Earl of Mar’s wife held firm and refused. Anne, taking to her bed in fury and heartbreak, suffered another miscarriage.

Refusing to give up, Anne played her trump card, refusing James’ instruction that she join him in England as his Queen and insisting that she would only travel if she had custody of Prince Henry. Frustrated with her ‘froward womanly apprehensions’ and ‘wilfulness’ but knowing when he was beaten, James allowed Anne and Henry to travel together.

The young Prince Henry was popular and charismatic, charming, and handsome and there were great plans for him as a leader and future king. His sudden unexpected death from typhoid fever during the celebrations for his sister’s wedding, shocked the world. England and Scotland deeply mourned the loss of the eighteen-year-old prince and their hopes for his future kingship.

None mourned more than the mother who had fought so hard for her son. Henry’s death devastated Anne, and her own health deteriorated. As queen, she had always been a great patron of the arts and enjoyed putting on masques and plays, but after the loss of her son, Anne withdrew, and her life became more isolated. The husband who was so infatuated with her at the start of their marriage visited less and less frequently and it was her second son Charles who was with her as she finally succumbed to dropsy in 1619. She was buried at Westminster Abbey near to her beloved eldest son Henry.